An EDGE for your thoughts!

As technology grows, so does the need for increased connectivity. The next generation of IoTs and connected devices require seamless transfer of valuable data from comprehensive data mining and successful businesses - and CIOs and IT managers are tasked with finding the best way to achieve this transfer while keeping costs down. While colocation and public cloud infrastructures have proven to be a recourse over the last few years, their inherent latency affects newer applications. Edge computing has become a sought-after option to fill the gap between data and end users.

Edge data centers provide low-latency access for local users; their “closer proximity to the user base” offers a “reduction [in] backhaul latency and potential network congestion” (Chernicoff, 2015). In comparison to typical data centers, edge data centers tend to be smaller and purpose-built. Because these facilities are smaller, edge data centers can appear just about anywhere. This means that they no longer need to be in remote locations - they can be built in more urban environments, closer to the people they serve.

As simple as these edge data centers appear, there are several key challenges that influence their construction and deployment. A range of infrastructure and climate considerations – such as fiber connectivity, cabling, telecom networks, humidity levels and weather conditions - play an important role in determining the feasibility of a certain location. Alongside these requirements, real estate in highly-populated urban areas is difficult to obtain and can prove to be expensive. Even after a favorable location has been identified, government regulations and compliance with zoning, acoustics and fire codes can then dictate whether the edge data center is successfully completed and deployed.

Failure to plan is planning to fail

The edge data center’s urban location – and its closer proximity to the people using its services – means that compliance with government regulations needs to be carefully managed throughout the facility’s design and operation. In a recent project, AEI encountered a challenge with the chillers and remote generator radiators located on the roof of a building in an urban environment. Usually, when properly sizing and specifying mechanical equipment, all factors must be considered; engineers will often review weather data, wind profiles, and - more recently - long-term predicted climate extremes to account for design conditions increasing at the extremes.  However, in this case, an aggressive project schedule required an equipment pre-purchase.

The chillers and radiators were selected for production based on the facility load calculations and agreed-to weather conditions. However, as the design team continued to develop the detailed project design, the sound consultant identified that the chillers and radiators purchased would exceed nighttime sound requirements by more than 15 dB(A).  This meant that the rooftop equipment platform would require additional screening. To meet the municipal noise control requirements, the sound consultant selected 24” deep V-blade acoustic louvers to surround the mechanical equipment.

AEI suspected that the screen wall would have an impact, but they needed to quantify the effect of the additional resistance to airflow and heat rejection from the equipment to allow the design team and owner to make informed decisions. To properly analyze the impact of the louvers, a comprehensive model of the radiator and chiller system was built, complete with the louvers and surrounding buildings. 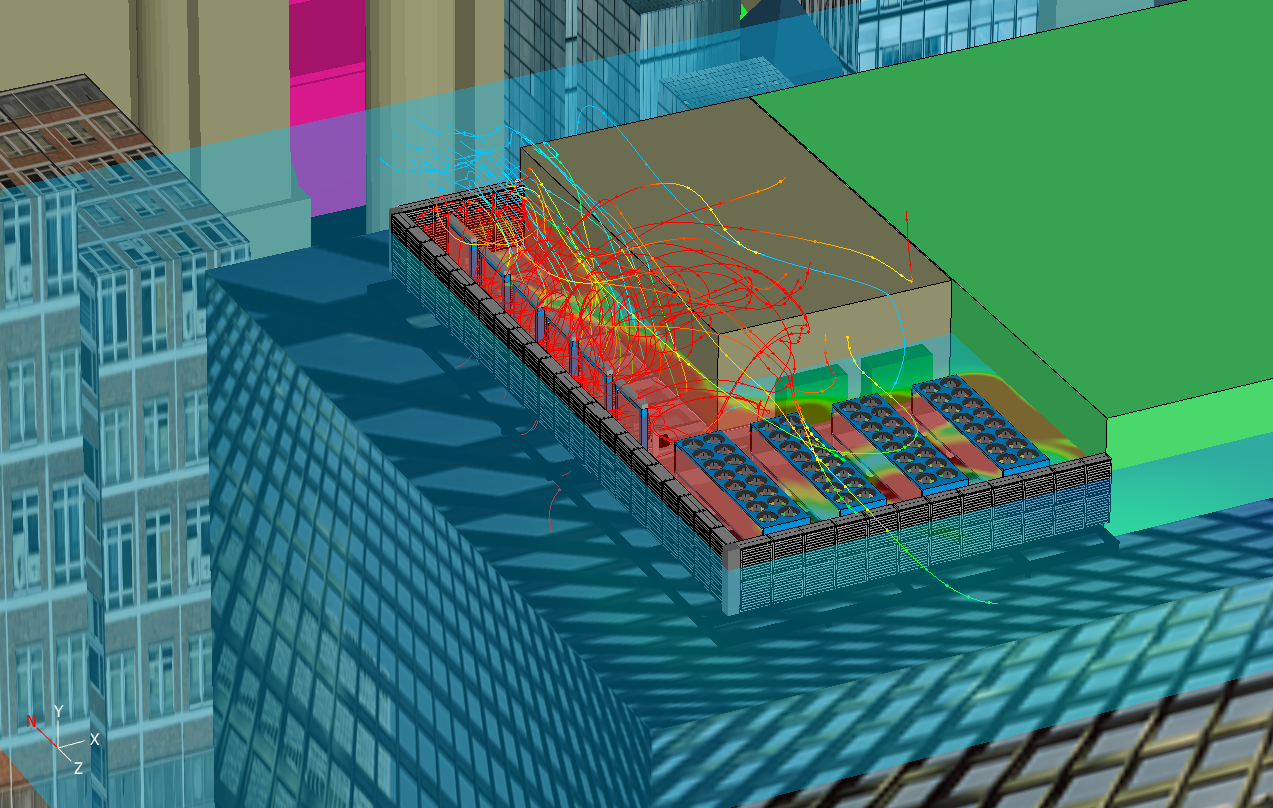 (a) Baseline model with the acoustic louvers, showing recirculation that results in a 40 F increase in radiator operating temperatures. 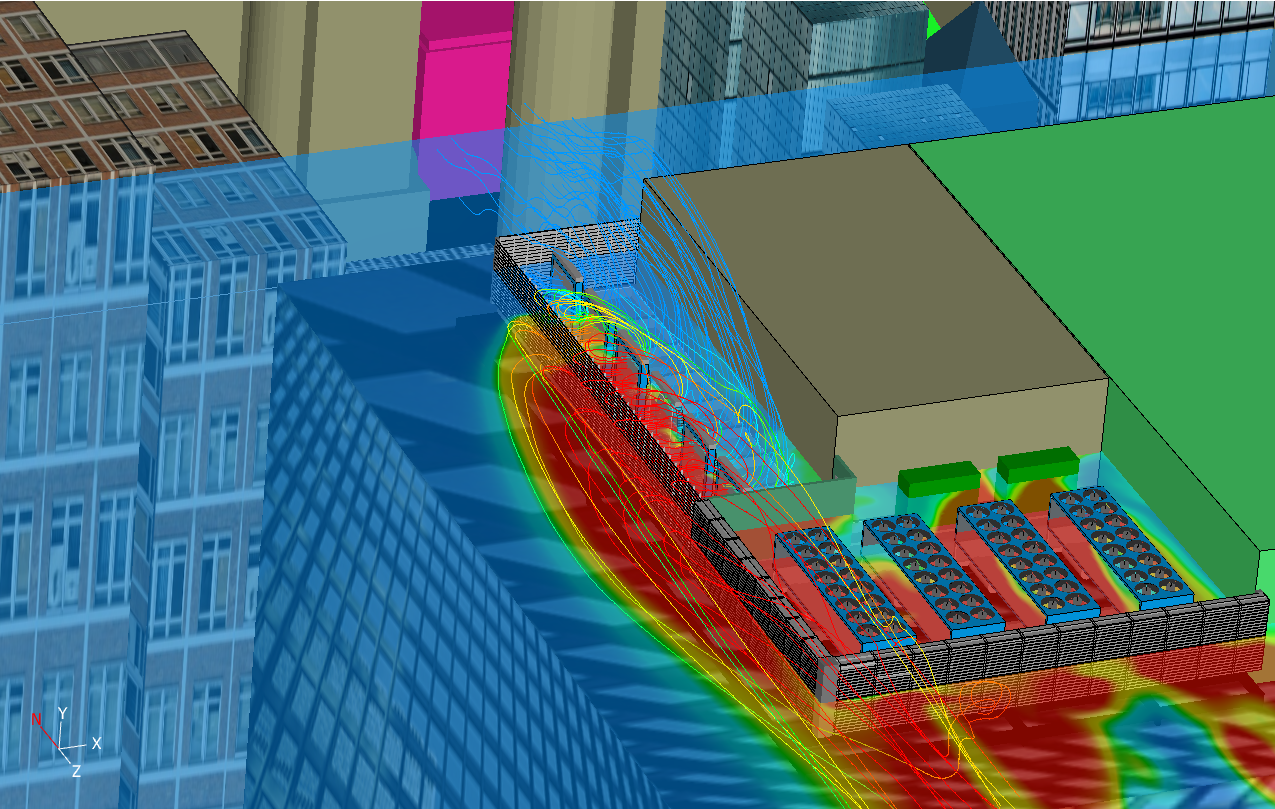 (b) The alternate design, which complies with the city’s acoustical restrictions while eliminating the previous recirculation effects. The radiator operating temperatures remain within design limits.

The design team was tasked with analyzing the impact of the acoustic screen wall on the chillers and radiators. A 6SigmaRoom CFD model of the rooftop equipment platform was created, with the selected acoustic louver modeled to match the actual airflow pattern and restricted free area (≈20%).  The initial simulation demonstrated that the attenuated restricted free area louver effectively operated as a solid wall, blocking forced air heat rejection from the generator radiator. This meant that hot discharge air was entrained back into the equipment coils, significantly increasing operating temperatures. The CFD simulation results clearly showed the radiator and chiller operating temperatures exceeding 40⁰F above ambient conditions. These results exceeded the equipment performance ratings and identified that the acoustic screen wall would compromise chiller and generator capacity during high ambient conditions.

Based on the understanding of the issues caused by the original louver, an alternate louver – one that would allow the generator and radiator airflow through while screening the equipment from neighboring buildings - was considered. The updated CFD model with the revised acoustic screen proved to be the best solution, reducing the radiator operating temperature by approximately 40⁰F and keeping its performance within designed thermal specifications.

The chillers were less impacted due to the vertical discharge of condenser fans, and the CFD simulation was employed to study further impact on the condenser operating temperatures from the acoustic screen wall. Based on previously established issues, we can conclude that more in-depth studies of different operating conditions under extreme temperatures past the current design will be needed.

By using simulation, AEI was able to test a configuration that, if implemented in real life, would have proven to be very expensive and caused catastrophic failure. The Virtual Facility platform allowed AEI to foresee cooling challenges in an environment with restrictive building regulations on existing architectural conditions, and helped them to design and validate a better solution.

Continuous management of data centers is key to ensuring 100% uptime while minimizing operating costs. Combining engineering expertise with the Virtual Facility - a platform that allows users to create a digital twin of the existing facility - enables engineers to test proposed changes before implementing them in the real facility, saving projects cost and time in construction.

Chernicoff, D. (2015). Postcards from the edge [Blog]. Retrieved from http://www.datacenterdynamics.com/content-tracks/core-edge/postcards-from-the-edge/94910.fullarticle

7 Tips You Need to Know When You WFH with 6SigmaDCX